Everyone wants a honeymoon right outta the movies, where you're whisked away in the waves or the snow and everything is just beautiful. But cut to real life, and you know that might just not happen. After all, most, or atleast some of us aren't our own bosses, and have more or less begged and bargained with our bosses for chutti for our own wedding! Hard-pressed for leaves and haven't been able to plan your honeymoon abroad properly? After all, all that visa and jazz requires some advance planning .No, get Goa or Udaipur out of your head right now! There is a honeymoon that you can plan abroad, even as close as 10 days or even right before your wedding, we did it ! The place we're talking about is Bali. It's as pretty as any other tropical island.. with your blue beaches, crystal clear water and white sand... and it's a trip that's easy to book without hassles and on a budget as well! All you need is a Passport and nothing else... (Ok maybe a bikini!) 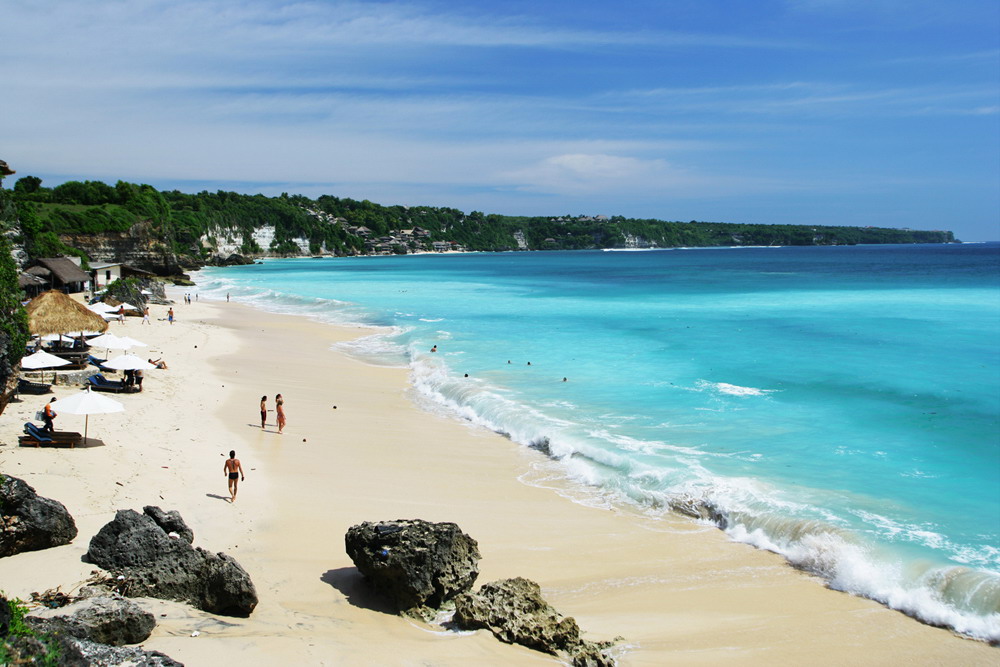 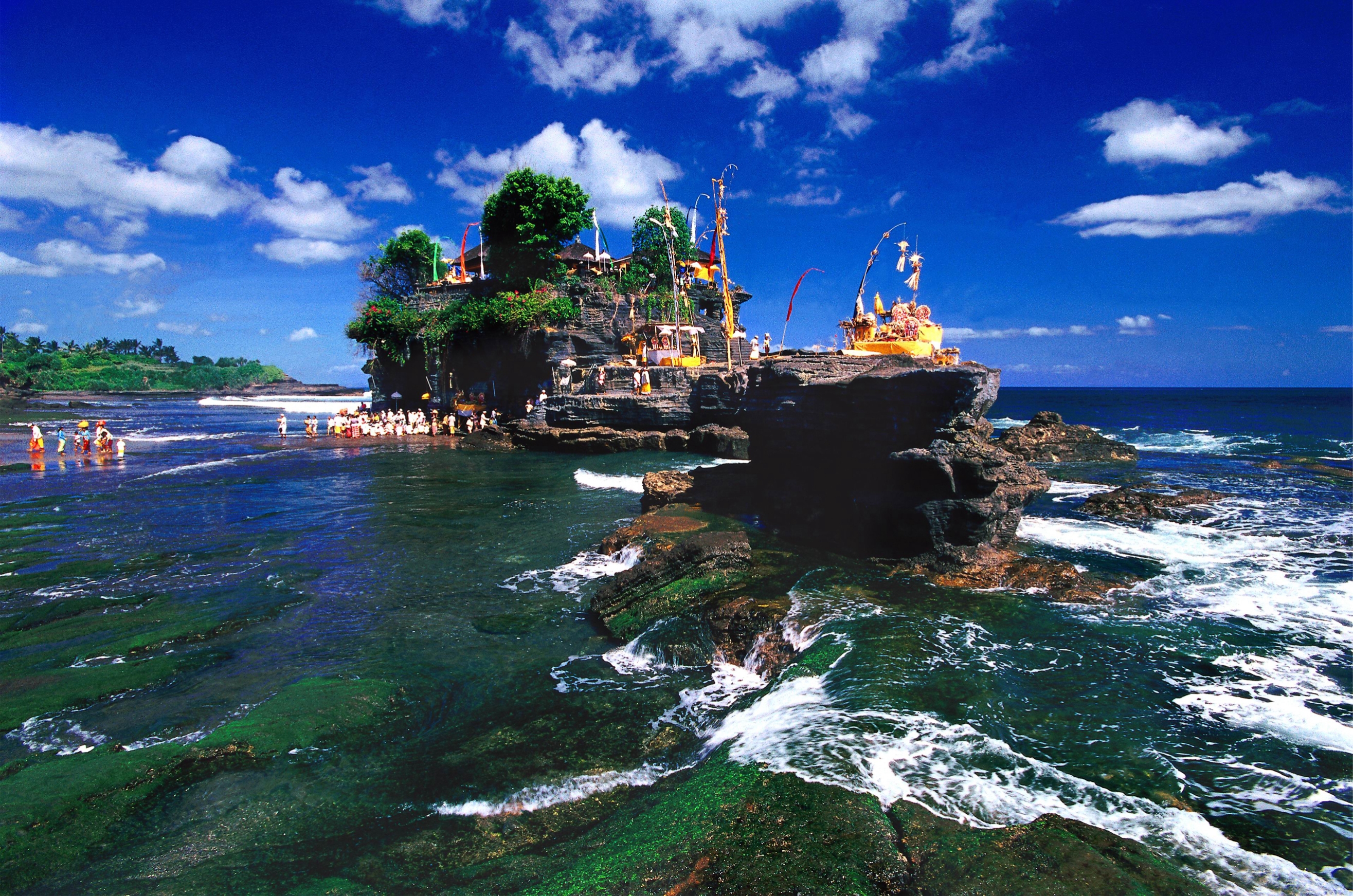 Weather Being a tropical island, Bali is hot and humid... but nothing we Indians cannot handle! Their average temperature is highest for the month of May, which is still in the 30 degree centigrade range! But yes, rainfall is something you need to check on, because this area is prone to storms... generally, December to March is when there is heavy rainfall. Pack Anything that you would pack for a trip to Goa! Load up on the sunscreen!   Visa No paperwork required here! Yes, Bali has Visa on Arrival, and you need to carry nothing else but your Passport. Make sure you carry 35 USD in cash per head in exact change for the VOA to pay at the Immigration counter, and you're all set. The visa is valid for 30 days. You will also have to pay up about 10 USD per head while departing as airport tax as well, which can be paid in Indonesian rupaiah as well. Make sure to carry pens to fill up the forms at the airport!   Flights This is what will majorly affect your budget. There are hardly any direct flights from India to Denpasar (Bali... yes that's how the name comes on the airline page). Most of them are either via Singapore or Kuala Lumpur. Now, any major global airline like Singapore Airlines or Malaysia Airlines will cost you about a lakh per head in tickets to and fro, that is if you book last minute. Booked in advance, you can bring that down to about a lakh to and fro for both of you combined. However, if you don't mind a smaller craft and lesser goodies on board, you can choose to fly Air Asia, which flies out of Bangalore and Chennai- and beat this, you can book round tickets for as much as Rs 60,000 for both of you! Yes, but no frills and perks! Make sure you prepay for 20 kgs check-in luggage in advance. Like we mentioned, you will most probably have a stopover, and barring that, the total travel time of both the flights put together should be about 7 hours in total. Make sure you check up on the transit visa and all at the transit airports, which mostly have a five hour limit. 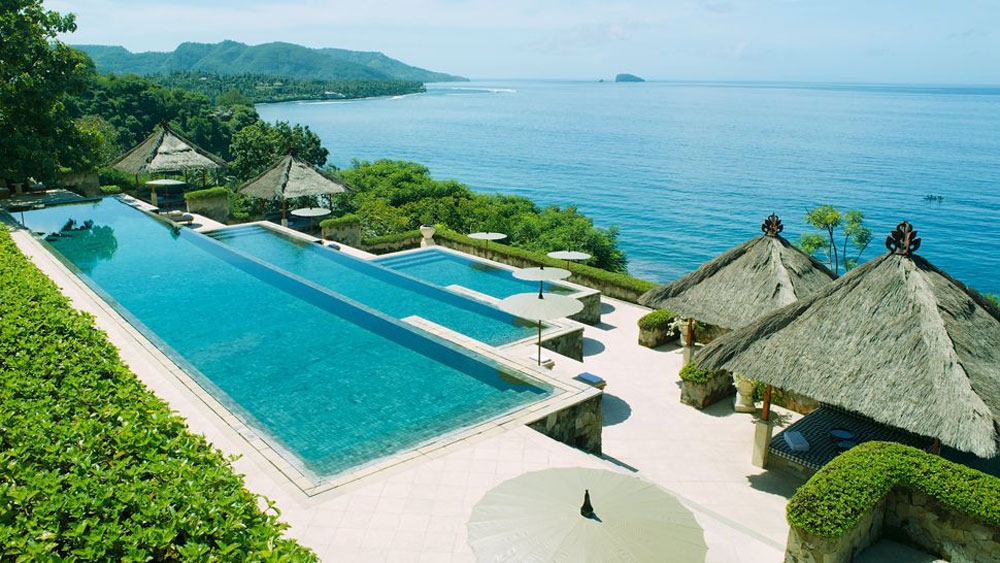 Hotel This again, is totally upto you. You can choose a 5-star which will roughly come up to 200 USD a night, or a 4 and a half star one, which has all the frills, only half a star and maybe about 80 USD per day lesser! But we recommend that you choose a hotel or resort in the Nusa Dua area rather than Kuta, which will give you more privacy and prettier private beaches! Since they get a lot of Honeymooners, Hotels there actually go the extra mile! Check out: Nusa Dua Beach Hotel & Spa , Sofitel Bali,  Courtyard Bali Nusa Dua, Bali Tropic Currency Make sure you convert money to dollars before you leave from India, preferably in fifties and hundreds. You will need it at the transit airport and maybe to even eat on the flight. The Indonesian currency is Rupiah, and we would advice you to convert your dollars to the local currency once you're there. Dealing in dollars will only make you lose money. We explain why. Now Indonesia is one place where you're gonna feel like a millionaire, even if you're not! After all, there aren't many countries where Indians feel rich! And literally a millionaire... you have currency notes worth a lakh there... 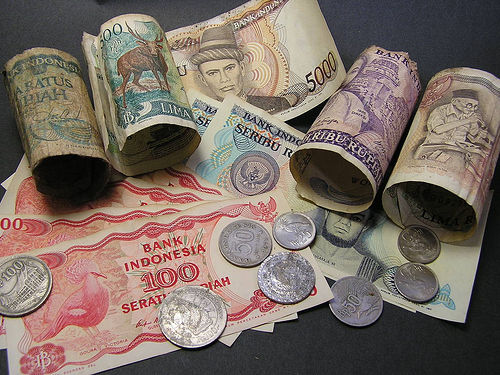 That's cz Indonesia's currency is down in the dumps, and a single dollar there is worth about 10,000-15,000 Rupiah, depending on the rate that day (as of early 2015)! There are money converters every ten steps away, and you can compare and go to any one of them. You can convert Indian Rupees in some places as well, but they don't do that as per the official market rate, so you're bound to be in loss. You might feel rich, but here's a how much you'll spend on an average... a single main course dish at a local restaurant will on an average be about 1 lakh Rupaiah... which is about 10 dollars... iced tea is about 20,000 Rupaiah and paying in local currency is better because all restaurants will give you a different exchange rate, usually lesser. Plus tipping in dollars becomes expensive because they do not bring back change. Food If there are 20 non-veg items in their menu, there'll be two for vegetarians. Yes, not much variety for veggies, but lovers of seafood, beef and pork will be in food heaven. They have a lot of their local dishes with confusing names, but most restaurants have this thing of having one menu with the names and another with the photos so you'll at least have an idea of what you're getting. Instead of eating at the hotel every night, we'd recommend you to just take a walk out and try the local cuisine at the street-side restaurants. Since it's a place that sees a lot of honeymooners, most of them already have bands and candle-lighting.   Commute Your best bet is to patao some taxi fellow and book him for all the local sight-seeing. Hotels cost a lot more to chaeuffer you around. You can bargain hard with the local drivers, especially in the off-season. You have an option to rent bikes as well, but we're told cops bribe people without International Driving Licenses.   Sightseeing and Shopping Again, Google will give you a lot of options, but choose where you want to go- depending on the distance and whether or not you want to spend the day travelling or chilling at the hotel since it is your honeymoon! Their 'palaces' are nothing fancy like what we have back home, but their temples are worth a look. Also, their local markets have shopping similar to Janpath... wherever you go, make sure to bargain a lot. You could also consider taking a day off and heading to Gilly Island, which is a ferry or a flight away! But if you do go to Bali, you have to have to have to go to Rock Bar inside the Ayana Resort and Spa- it is the most beautiful bar you'll ever go to in your life! After all, it's on the edge of a cliff, and you need to go down a cable car to go there! 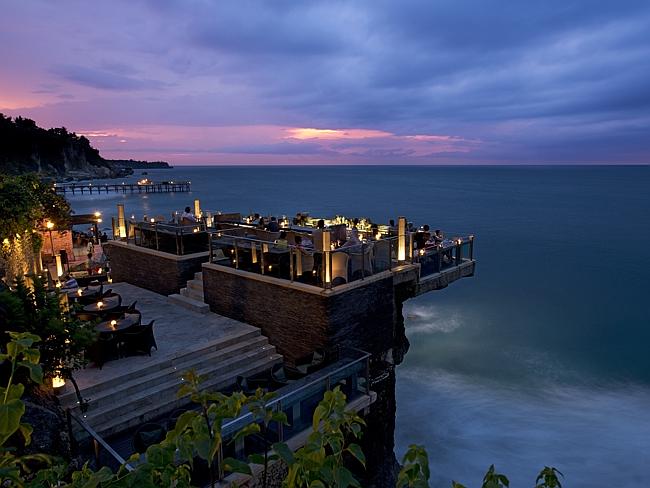 The rock bar at the Ayana resort and Spa is a must visit.

Beaches and Water Sports Like we mentioned before, mainly there's Kuta and Nusa Dua. Kuta is like any commercial beach in Goa, while Nusa Dua has private beaches and generally much cleaner, white sand kinda romantic ambience. To go from one area to the other takes atleast an hour! There are water sports in almost all the beaches- if you tie up with your hotel for it, OK, but for the local ones? Bargain hard. So there it is... a detailed round-up of what, when, how and where in Bali- which we may add, can be easily wrapped up in 4-5 days! Add your comments below if you've been there! Contributed by Sakshi