Another year, another round-up.. but trust us when we tell you that this had year the prettiest, trendiest, most offbeat lehengas we've ever seen or featured! Here are the best lehengas we spotted on 2017 brides- the ones you guys loved on the WMG app, the ones that got the most number of saves on wedmegood app..the ones.... you get the drift. 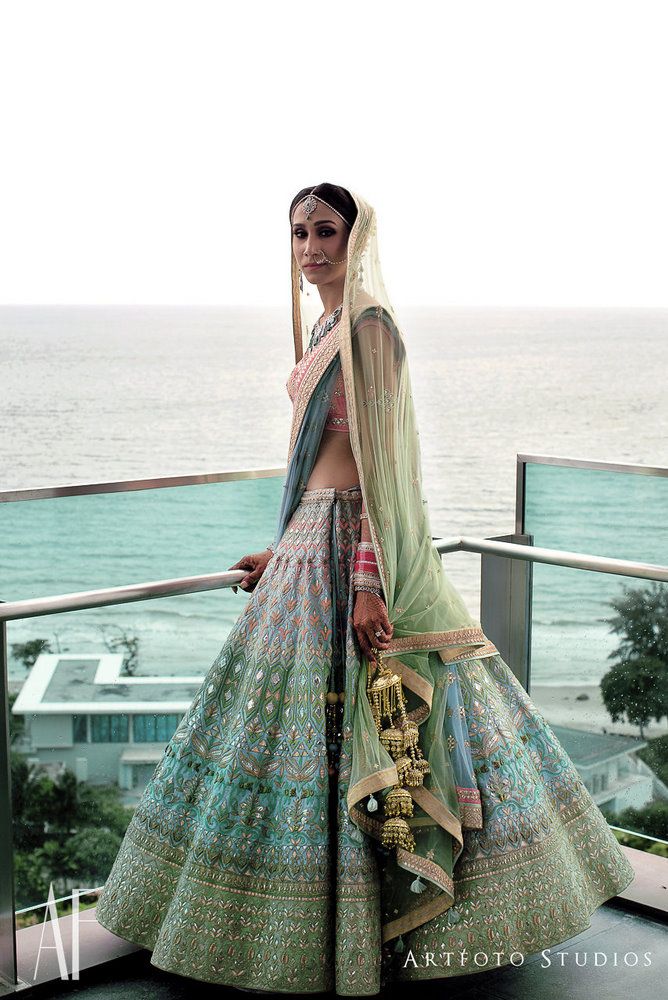 Image via Tania and Vidhu's Wedding; Outfit by Anita Dongre★ 4.9

In hues of aqua and pink, this one was so refreshing from all the ones we have seen

The grey-lilac Shantanu & Nikhil lehenga that had us at hello!

In a unique lavender, wth a wide ghera, this outfit had us at hello. Classic Shantanu Nikhil with oodles of intricate embroidery 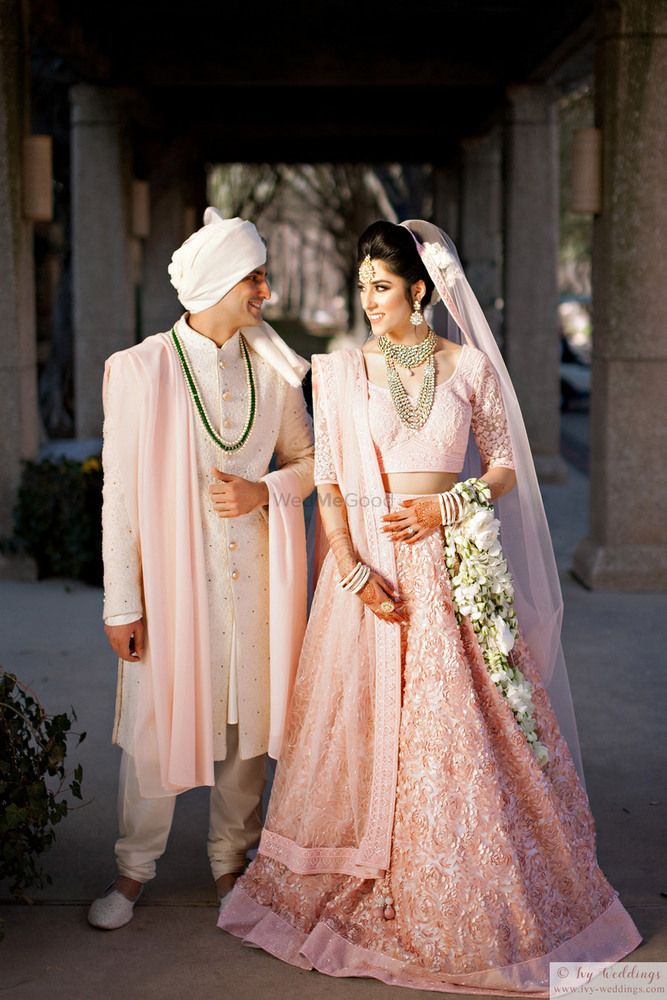 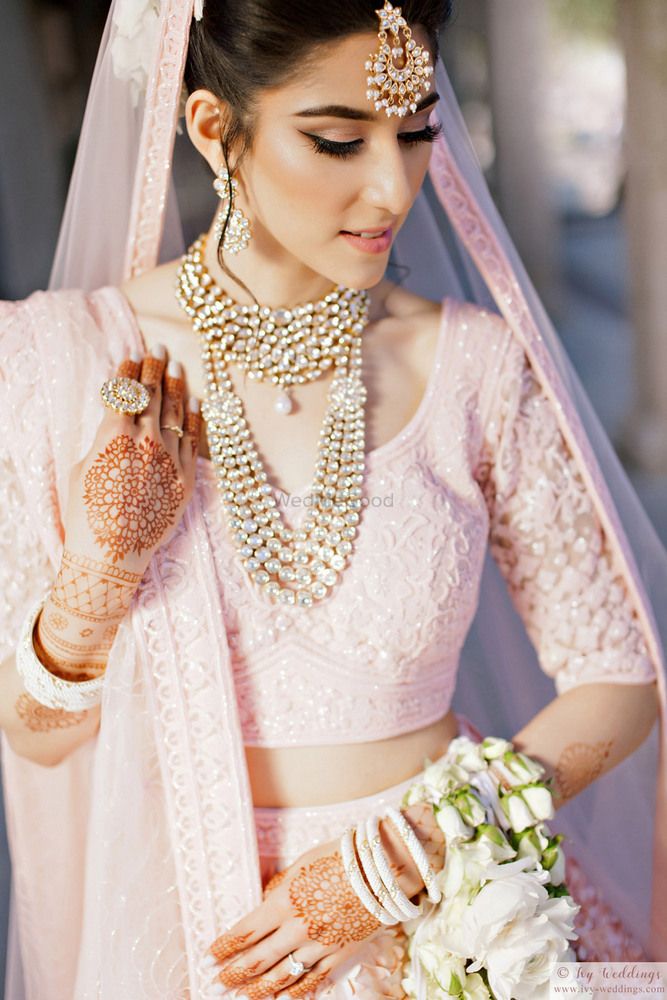 Image via Sandeep and Natasha's Wedding; Outfit by bZAI by Natasha Arora

On first look, it's a plain lehenga, but still so so pretty! Love how pleasing to the eye it is!

Anupreet's white and gold lehenga by 'Sidhuji by Anupreet Sidhu' 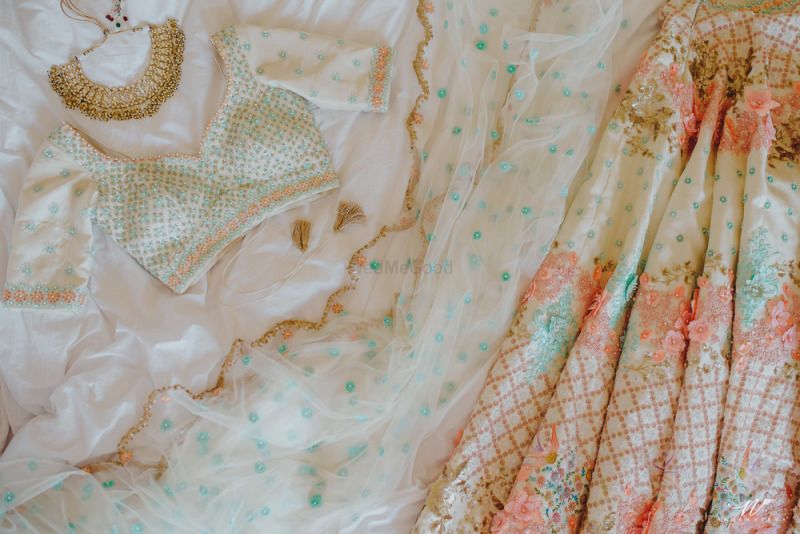 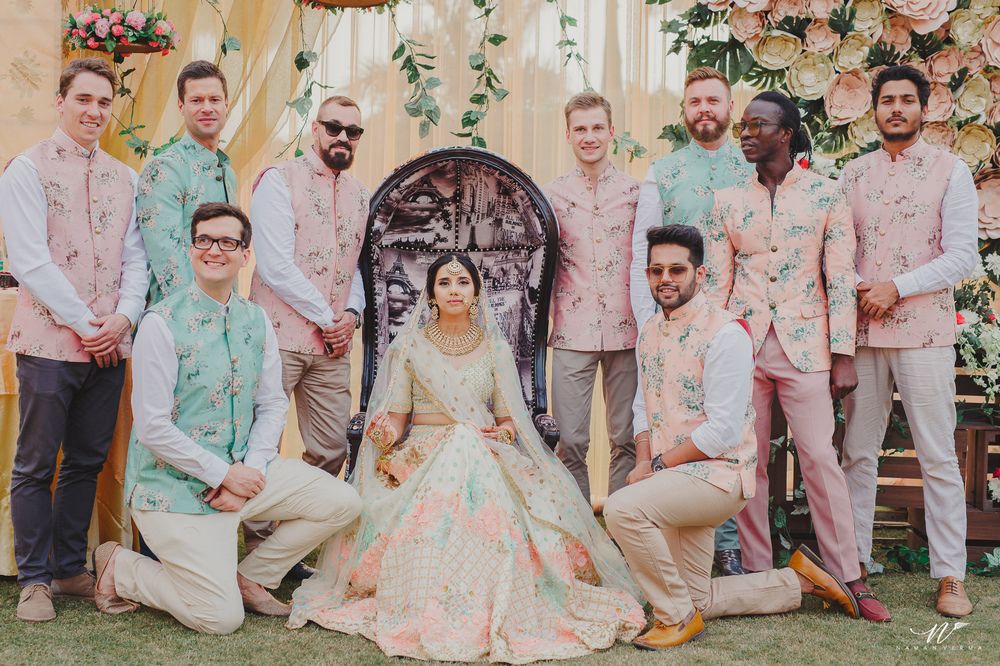 Image via Anuprit and Akshit's Wedding; Outfit by Sidhu Ji★ 5

A bride who wore a pretty outfit like that one, and what's even better is that it's from her own label! Love the refreshing choice of colour on white! So pretty! 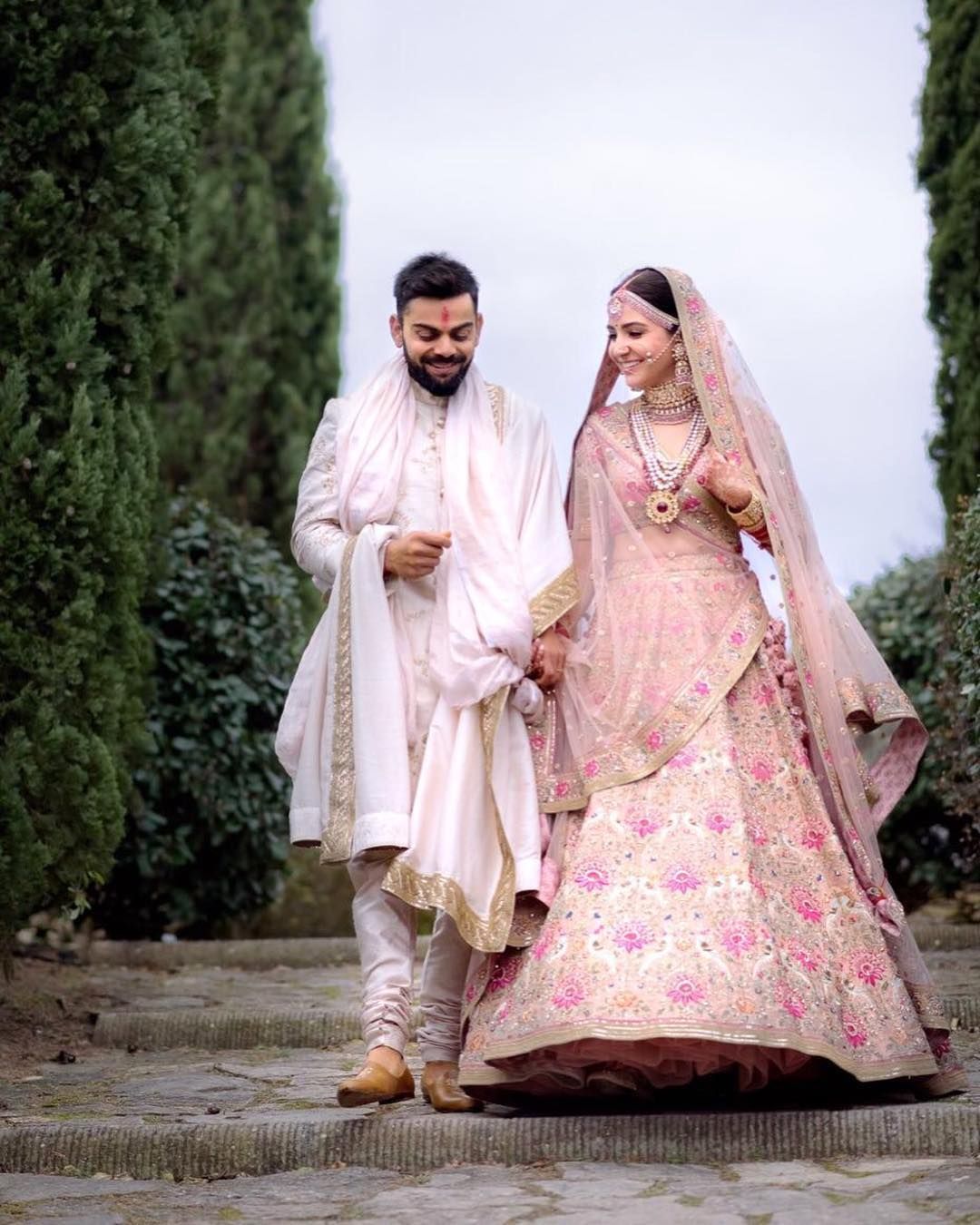 I mean, how could we not add it to the list? The lehenga was too pretty, hand-embroidered and embellished with floral motifs!

Aanchals mint and bright pink lehenga with that awesome blouse! 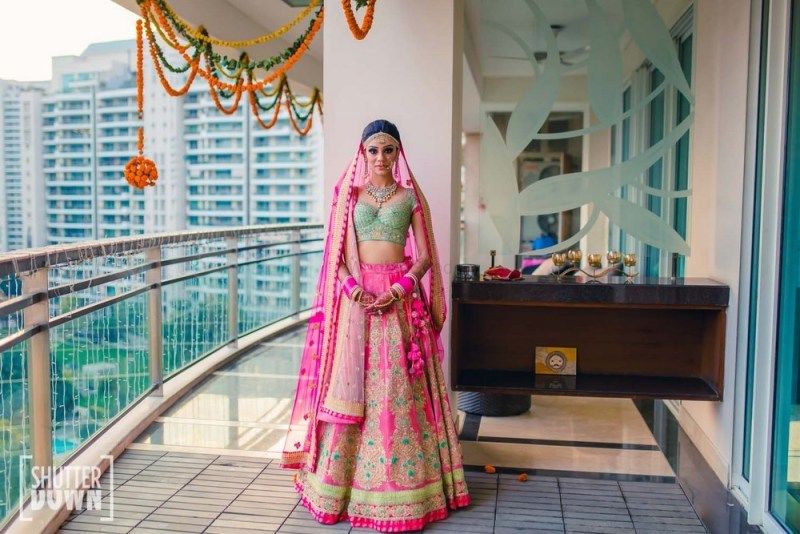 Image via Aanchal and Rahul's Wedding; Outfit by Sabyasachi Mukherjee★ 4.9

The blouse really did it for us as far as this lehenga was concerned- not only is the combination so pretty, but how pretty is the design of that blouse? 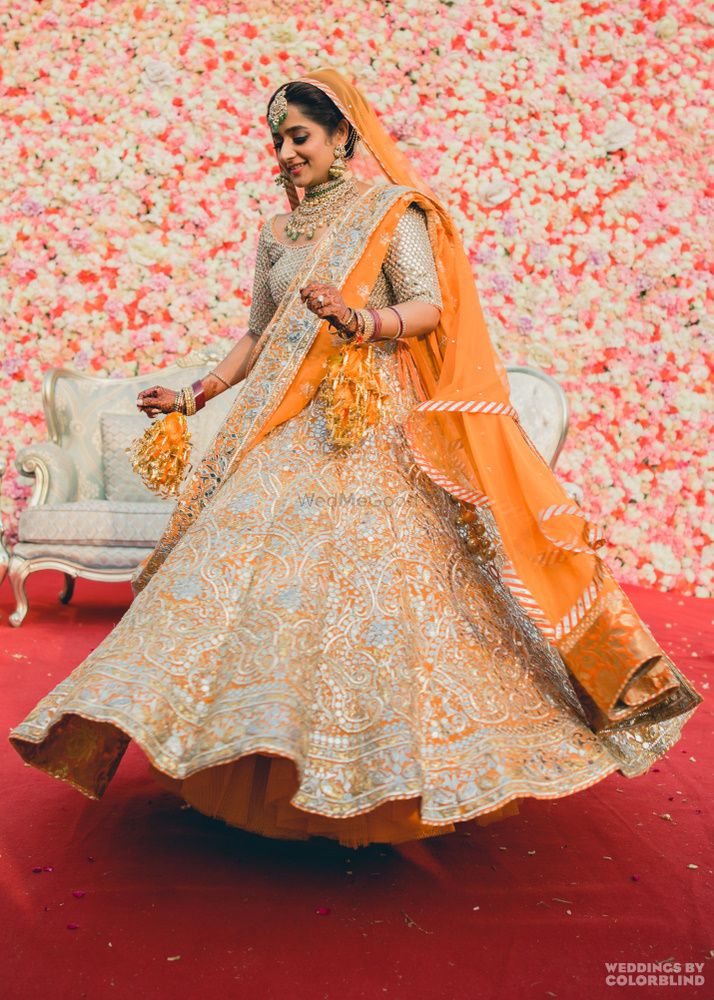 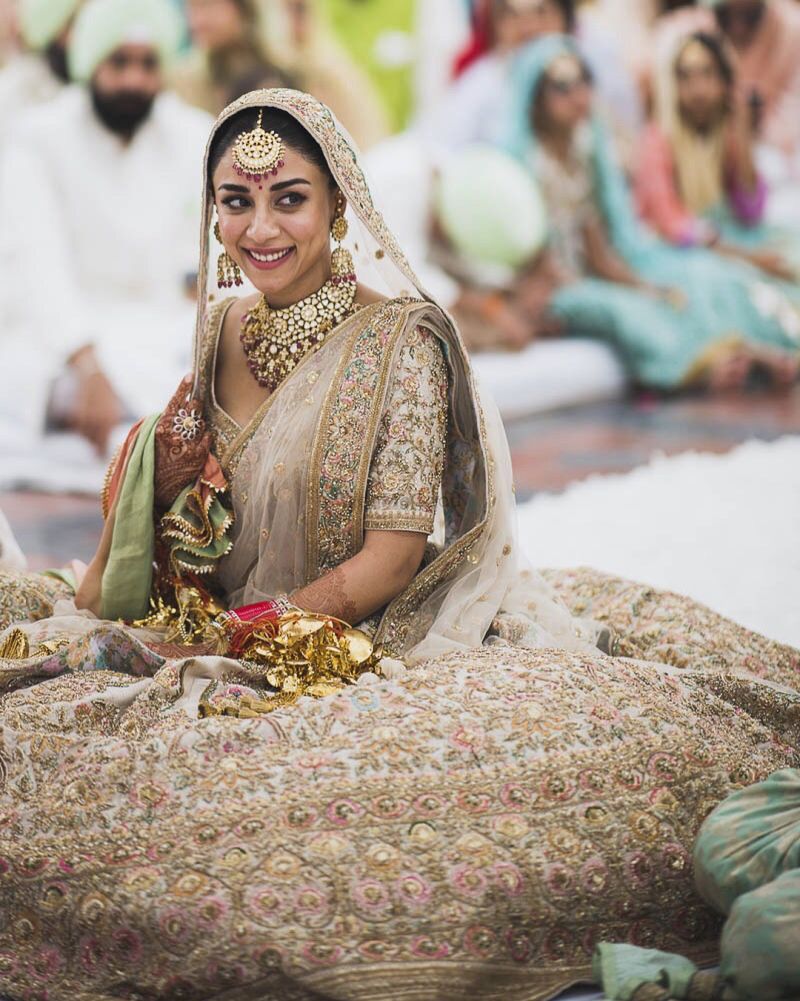 Image via Élan Events by Nipunika; Outfit by Sabyasachi Mukherjee★ 4.9

This one was another stunner! Ivory and gold lehenga with floral motifs embroidered all over- the lehenga really stood out and how!

Samantha Prabhu's gorgeous lehenga that had a pretty unique hue! 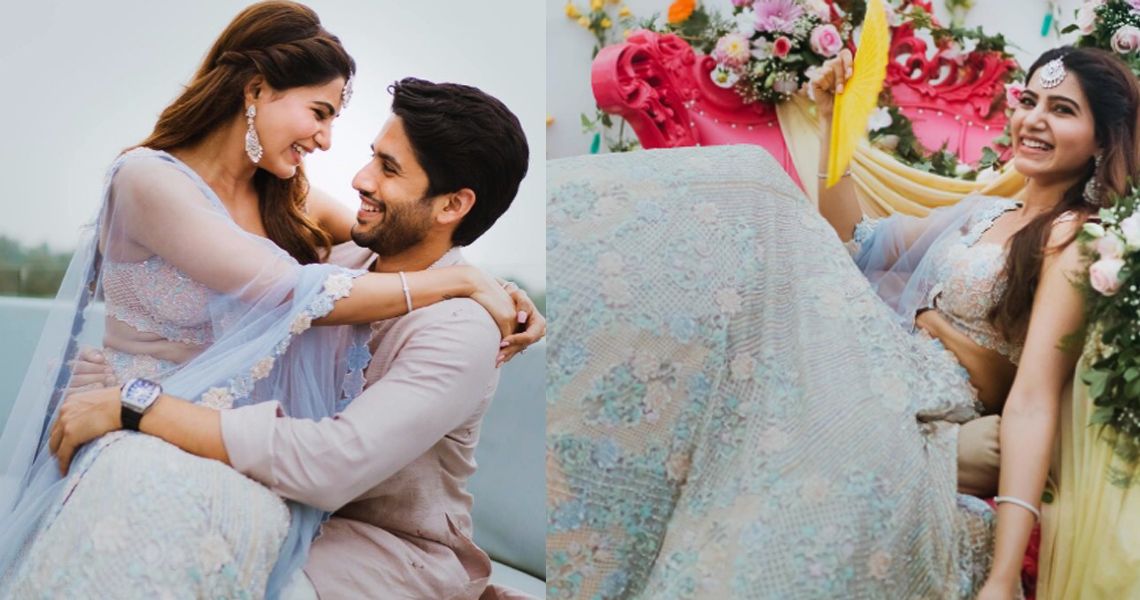 That's the kind of lehenga that would be worn if fairytales were real! I mean, just look at that gorgeous shade of lilac and blue! 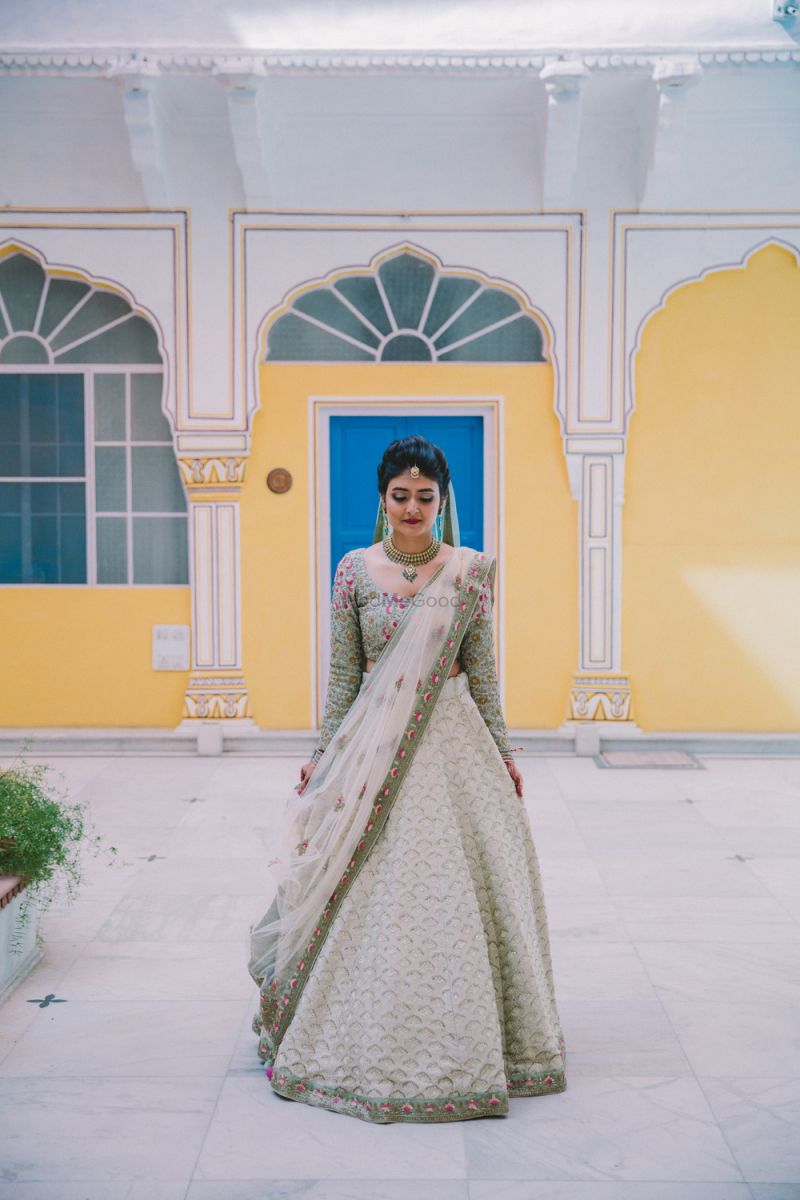 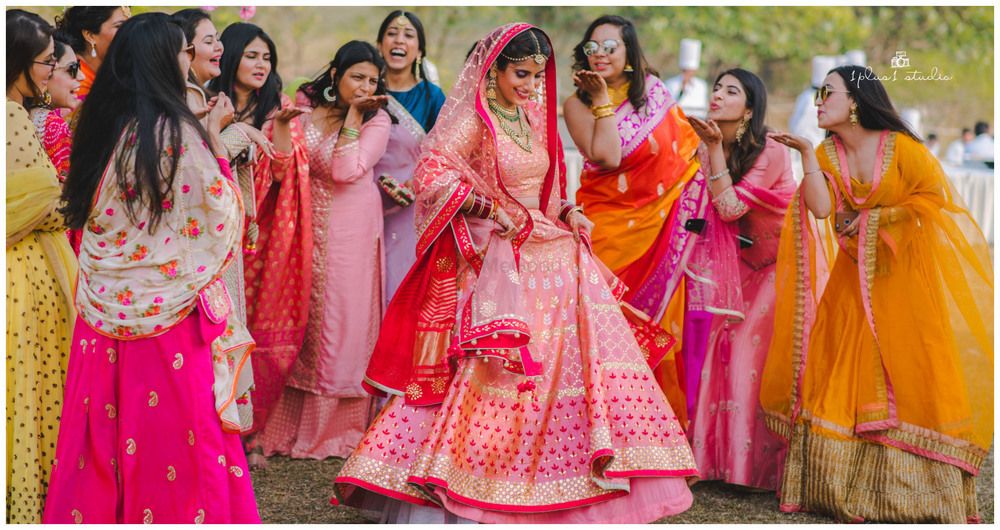 The lightweight fabric and the soft candy pink made this perfect for brides who want to keep it super light . 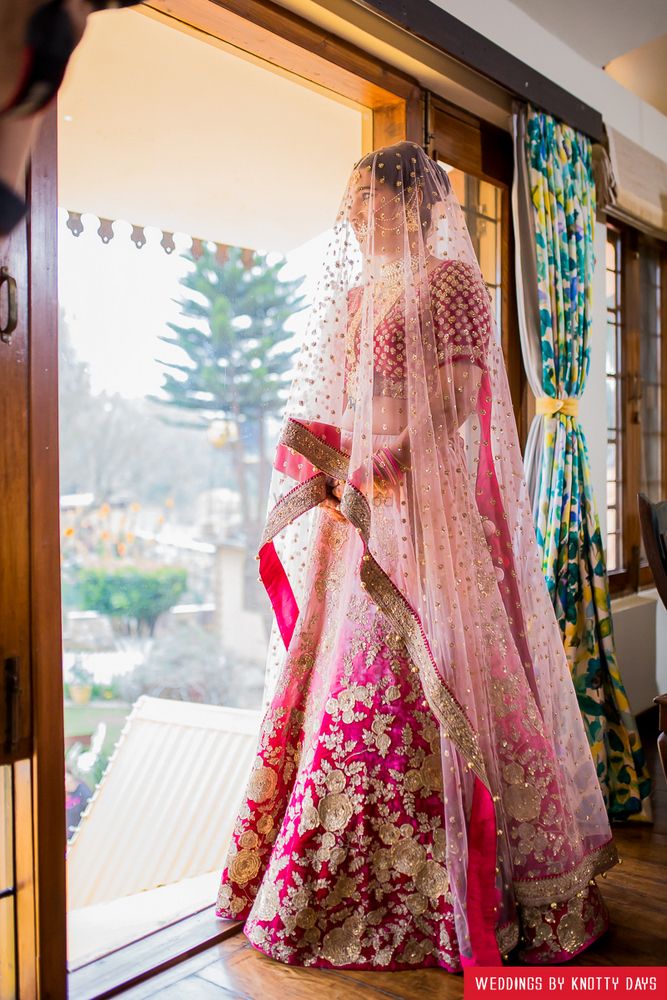 We loved this ombre pink lehenga with zardozi gold roses

This lilac prettiness which was just dreamy! 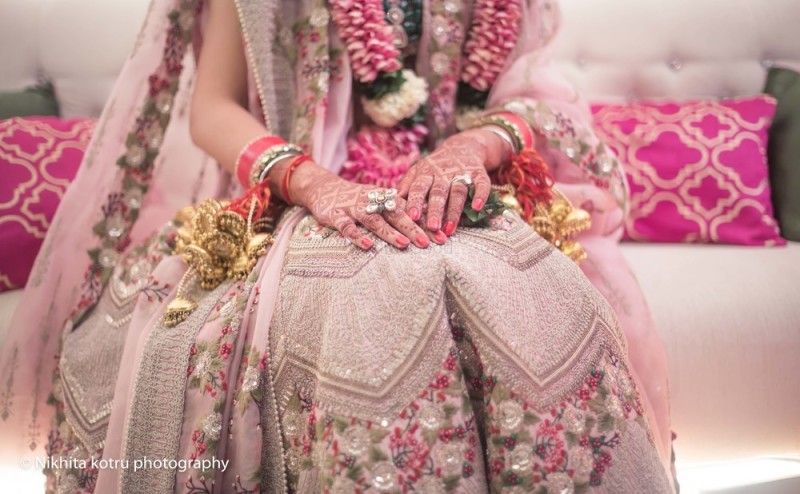 Image via Anuja and Umang's Wedding; Outfit by Anamika Khanna★ 5

An offbeat shade like that and that pretty floral embroidery made this one a winner! 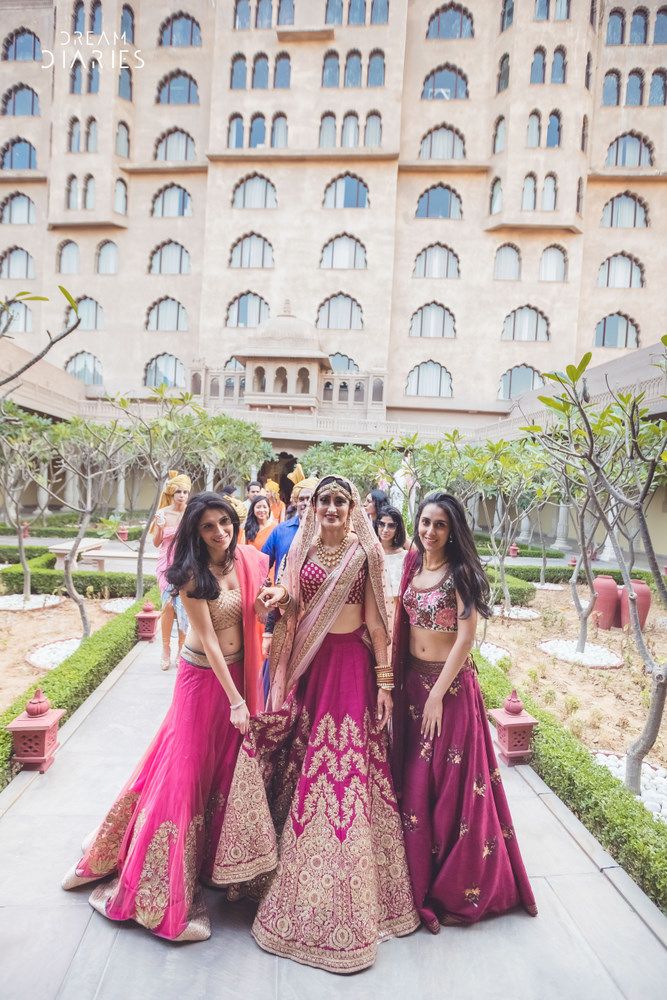 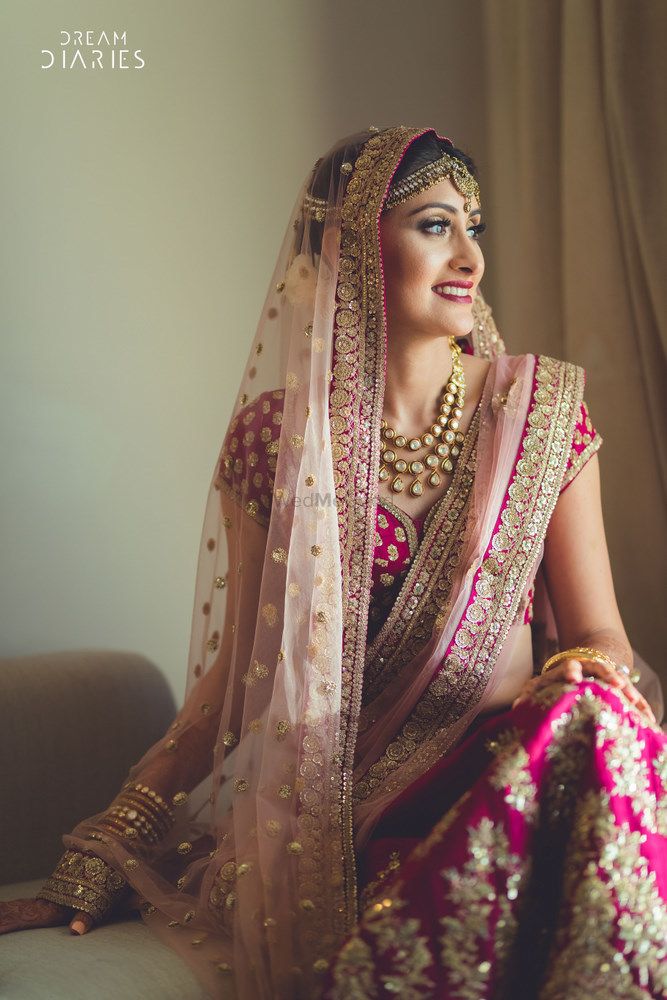 From the wedding: Sareena & Manav 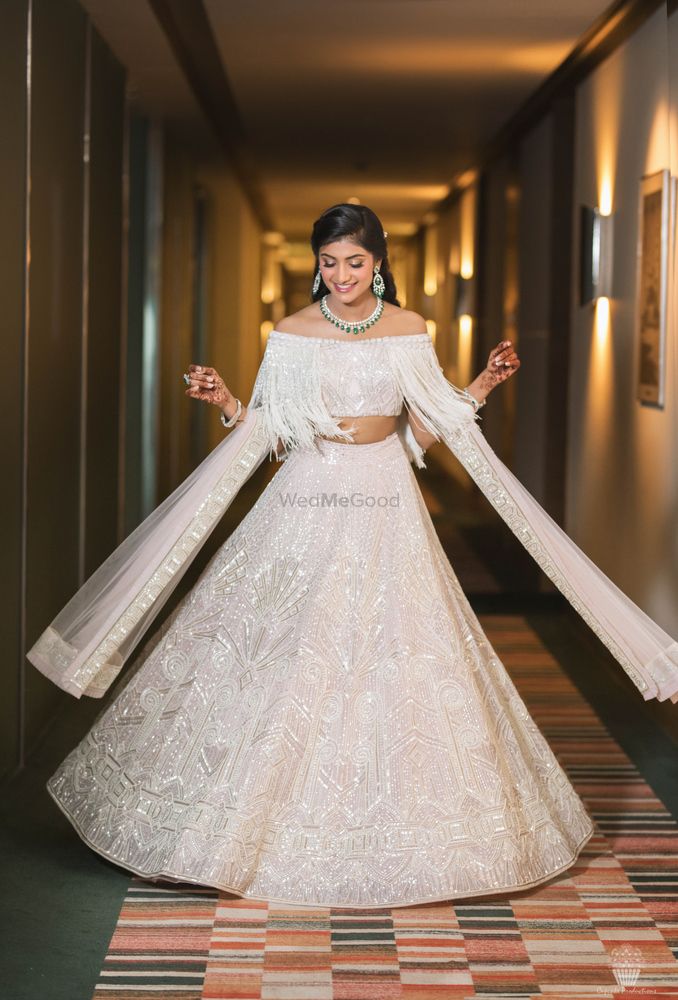 Image via Arvind and Mansi's Engagement; Outfit by Abu Jani and Sandeep Khosla

That's one dreamy lehenga right? Love the fringe and the in built dupatta- so trendy and amazing! 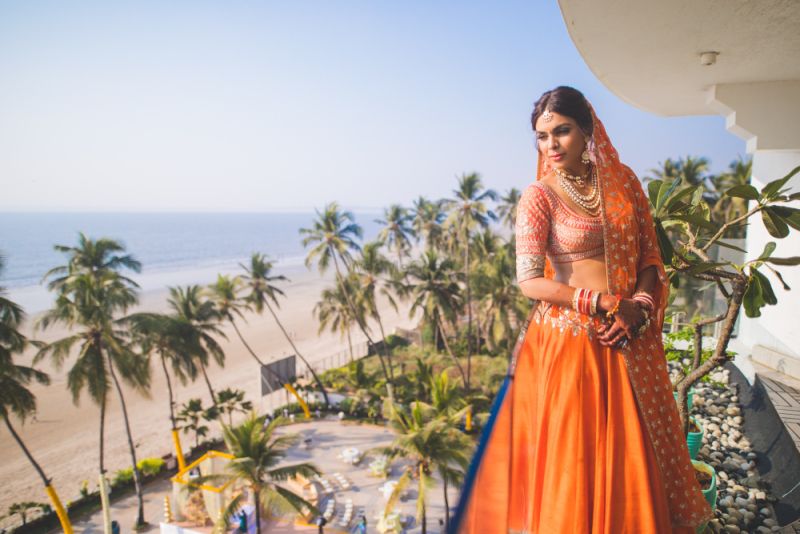 Image via Aastha and Karan's Wedding; Outfit by Anita Dongre★ 4.9

A bride in top to toe orange? Now you don't get to see that enough, especially when the lehenga lets the colour do all the talking!

Nikita's lilac lehenga with a waist belt by Tarun Tahiliani

Image via Yash and Nikita's Roka; Outfit by Tarun Tahiliani

Now that's a lehenga fit for a princess! Love the pretty work and that unique floral waist belt!

This icy blue lehenga that's so offbeat for a bride! 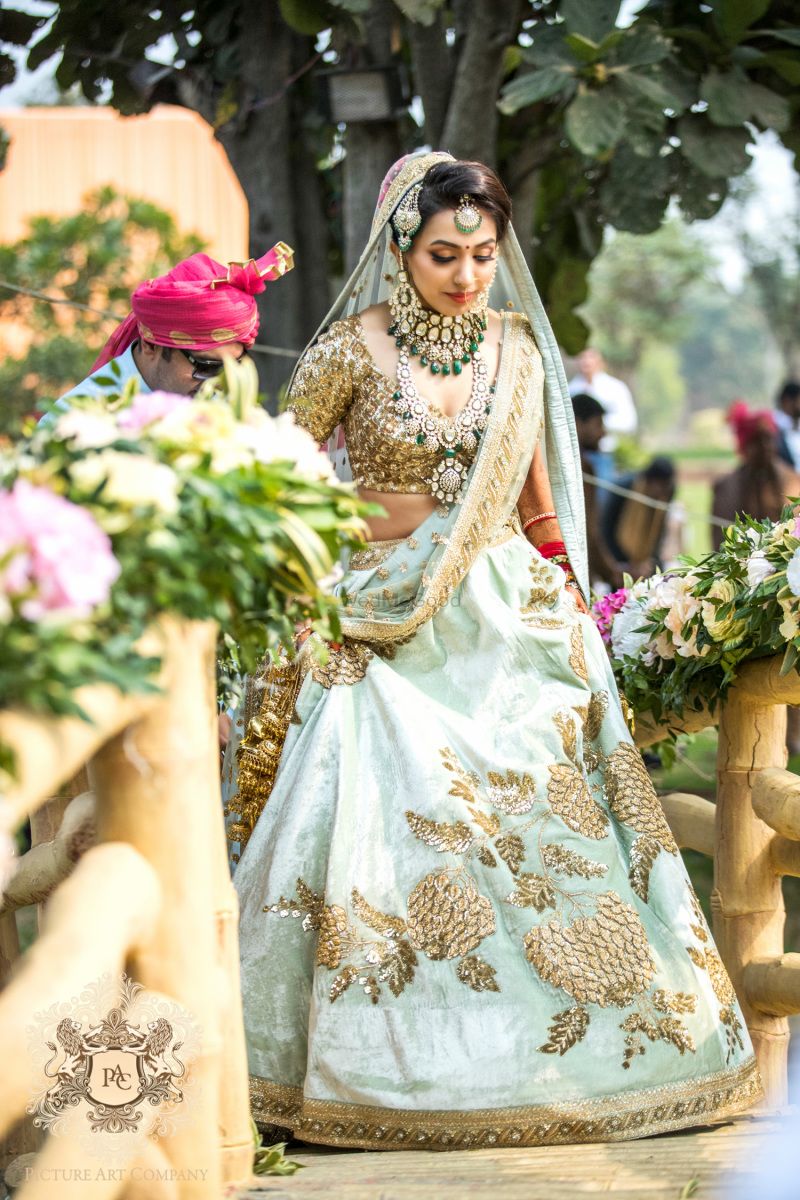 Image via Nayana and Jai's Wedding; Outfit by Sabyasachi Mukherjee★ 4.9

It's not everyday that you see a bride rock a pretty shade like that one, so this had to be on the list! So offbeat and pretty!

This red bridal lehenga that's traditional, but still so pretty! 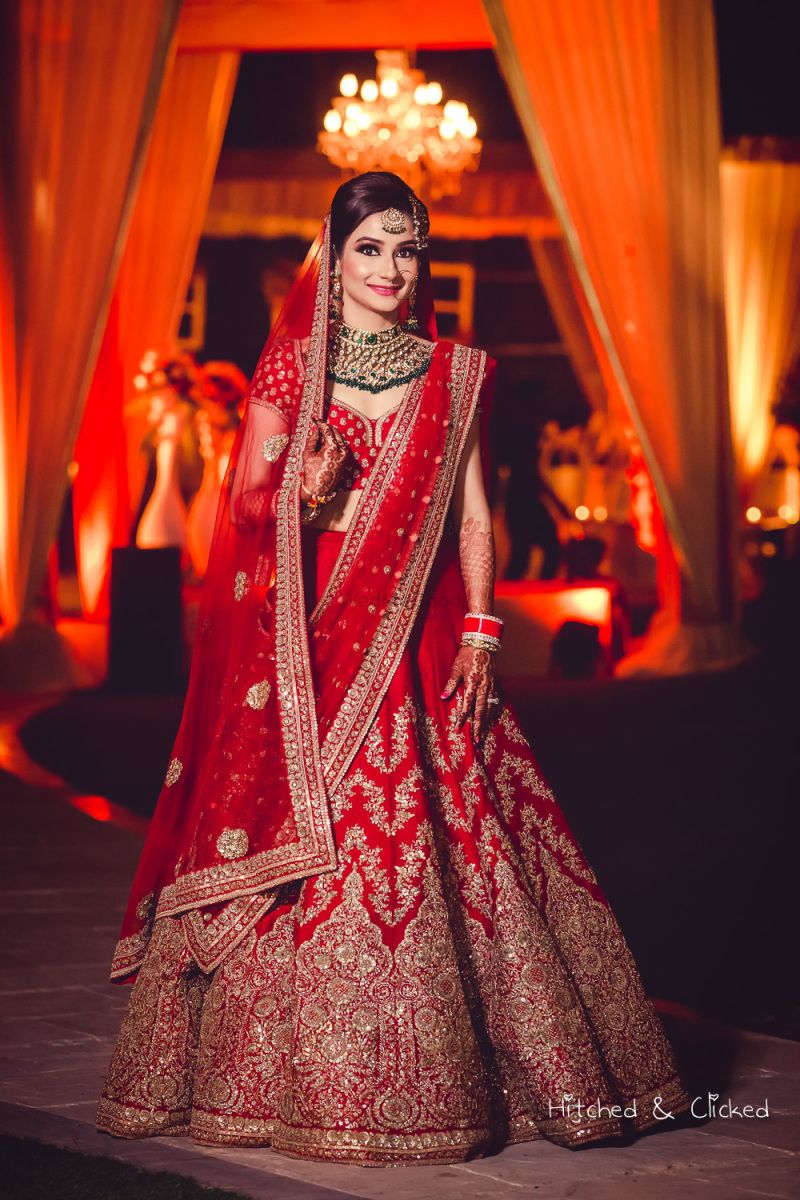 Image via Arshiya and Akshay's Wedding; Outfit by Sabyasachi Mukherjee★ 4.9

I know, you're gonna say another Sabyasachi, but how gorgeous is this one? It's red but nothing like the ones you usually get to see!

The pretty lilac Rahul Mishra lehenga we were gushing over! 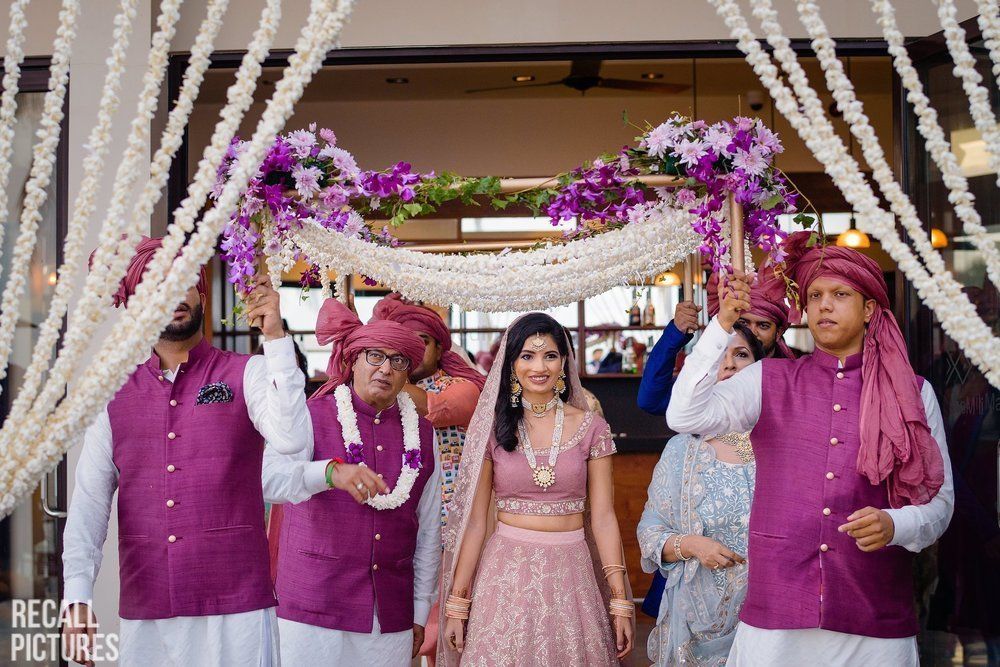 So, which one is your favourite?

#Honeymoon Ideas: A Nude Boat Cruise In The Caribbean!